“Romance and Righteousness: The Creation of and Historical Significance of Favi Estrella’s ‘Cruisin’ with You’ Music Video”

All power and love to Favi Estrella, a soothing soul singing homegirl warrior, and to her magnificent crew that filmed this beautiful empowering artistic video, “Cruisin’ with You,” which is dedicated to our fallen brother Alex Nieto.

Our movement, Amor for Alex, is a creative revolution, a perpetual pursuit for passion.

Favi Estrella’s new hit “Cruisin’ with You” exemplifies puro amor and community in action. The tragedies that are daily pressed upon us are our opportunity for creation. With our tears, we make art. If beauty is truth, then here it is, in every scene and shot of the video, and that is why the “Cruisin’ with You” video deserves a thorough analysis.

Favi had called me only days before the video filming to ask if we could gather enough gente and lowriders for the proposed video. After calling Roberto Hernandez, the mayor of La Mision, we organized and promoted a free barbeque, lowrider show, and signature gathering party at an event entitled “Independence of La Mision” to be held on Friday, July 3, 2015. While the gente and lowriders packed La Raza park, Favi and her crew almost didn’t make it, as they had been accosted and harassed by the Oakland police at the same time they were supposed to be with us, yet the filming, even with its obstacles, was meant to be, and she made it to witness an entire community of lowriders, children, veteran OG’s, political warriors, and families united to uplift the positive message of fighting against gentrification and of love and justice for Alex Nieto.

The movement for Alex Nieto began on March 21, 2014 when scholarship student Alex was shot at 59 times and killed by the San Francisco Police Department. Since then SFPD and the San Francisco machine have continued to attempt to oppress us with their lies and cover-ups, but we as a community are resilient and persistent. We hold endurance, that trait that withstands oppression and continues forward simultaneously. Since he was unlawfully killed we have marched, sung, painted many murals in Alex’s honor, performed poetry, created film, and held magnificent lowrider shows. Aztec dancers have blessed us with their spirit, and we have hosted informational booths at events such as Carnaval. We have spread our positive message using writing, videos, posadas, Burritos on Bernal, celebrations at the cemetery, y mas! Our search for truth will not end until Alex’s life is vindicated.

“Crusin’ with You” is Favi and the community’s latest art to combat injustice. Favi’s delicious soul soothing style of singing lowrider oldies is a revolution unto itself. She carries a voice of compassion that glides us into a new era of activism, one that is rooted in the streets, our positive community. Hypnotically, Favi sustains her lyrics with sensuality, but not a poisoned commercial hedonism. She respects the unique history of the Mission and Bay Area street culture, which adds a metaphysical dimension to her sound. Her singing is a cruise, a lullaby, not to put us to sleep, but to awaken us to our community responsibility.

The opening shots of the video are of Favi reading and viewing intense literature and historical photography. One book is of Ted Pushinsky’s photography, and in it there is a world famous shot of 1970’s 24th Street Mission Homeboys marching down the street with their boom box. In the background one hears two mas firme classic cholo oldies, The Moments’ “Love on a Two Way Street” and Malo’s “Suavecito.” These songs are salutes to our romantic and loving traditions in the barrio. On Favi’s door is a genius pencil penitentiary style mural drawing of Favi, a 1964 Impala lowrider, and the elegant script “Cruisin’ with You.” Political testaments of struggle, these intricate drawings were a way for incarcerated homeboys to kill time and create love out of an empty page. With mass incarceration that erupted in the 1980’s, homeboys found themselves victims of the system and locked up for great lengths of time. They fought back with art, as many homeboys learned to be detailed and creative, drawing out history and visions for special people on the outside.

Next in the video you witness the Homeboys and Homegirls come to pick Favi up for their cruising journey. The cruising tradition is an American tradition, but here it has a Brown Homeboy and Homgirl street twist to it. Cruising is a way to escape the static nature of life. Cruising is a movement outside of the self and into community bonding with others. It is a way to live and love. They cross the new Bay Bridge and reach their destination, San Fran Mission’s La Raza Park, headquarters—a meeting place where there is no need for closed-in offices or minute keepers. Organizing is done on the streets. Homeboys and Homegirls have gathered together at Raza for the past forty years. We simply make things happen.

“Because of the lawsuit [for police harassment] and all of that, we were making the city and the mayor look real bad, so the city came up with the money to build La Raza Park. So we wanted actually to build a Low-Rider park. But the City didn’t go for it, so we negotiated for an amphitheater, and so we did concerts. Yeah, we used to have some badass parties here, and then we would have car shows on the side of the street.

So we were real happy about that, that was one of the major outcomes of organizing as Low Riders …”

–Roberto Hernandez quoted from an archive in the Newspaper El Tecolote.

Note that in the video Favi sings on top of Bernal Heights Mountain, a holy precious peak. One can see the magnificent view and just dream to be there. Who wouldn’t want to spend some time reflecting and singing on top of that gorgeous hill? Favi sings exactly where Alex Nieto spent the last moments of his life. He went to eat his burrito before having to go to work as a security guard. He was scheduled to work in less than two hours. Alex always ventured up to that beautiful place to clear his mind. SFPD killed him in cold blood on top of that same mountain where Favi, with red flower in her hair, sings to him.

The video then captures the posted colorful lowriders—Impalas, Cutlasses, Deluxes, Cadillacs and one red Monte Carlo which Alex Nieto cruised in many times. The “Bombas” are featured prominently, those 40’s and 50’s Chevys that trace our roots back in this country and show our unique American-ness. We respect our past, perhaps more than others, in that we value what the new gentrifying residents of the Mission have thrown away. We create art from antiquity.

Throughout the video you witness the free barbeque, people eating, DJ music spinning for all the gente. Congas banging, OG’s laughing, posturing, and dancing. You are amazed by the vibrant banners: “Amor for Alex,” “Justice and Love for Alex Nieto,” and “No Monster in the Mission.”

Unfortunately, after the board voted against the referendum, Mission activists were told they had only twenty days to collect 9,000 signatures for a ballot measure. An army of community members were put together to gather signatures. The Lowrider Council and Amor for Alex united to obtain signatures. In the “Cruisin’ with You” video you see Roberto Hernandez speaking. We used the video filming as an opportunity to galvanize people around this noble cause against gentrification. The following Tuesday after the video was filmed, one hour before the deadline of the ballot measure, San Fran Mission activists registered over 15,000 signatures. We have been assigned the letter “I” ballot measure for San Francisco’s November 3, 2015 voting day. Our chant: Vote yes on “I” love the Mission! “I” love San Francisco! 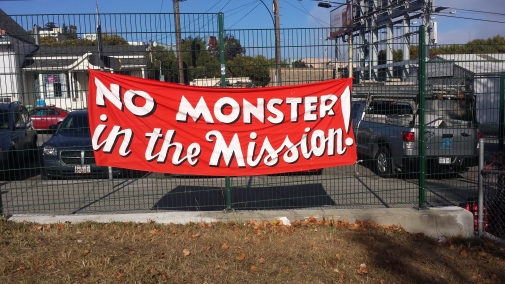 Other powerful images from the video: An African American Motorcycle Club rode through and joined us in solidarity, cheering us on as we took pictures and smiled together. Our spirit of love spread to each other. Handmade jewelry is also displayed, custom made by our own Mission jeweler, Friscasso, a homeboy of La Mission.

The starkest image, however, is that of a set of parents standing up for their son. With dignity, Refugio and Elvira Nieto, parents of Alex, stand together in front of the lowriders and banners. They are our inspiration for justice and the next generation. 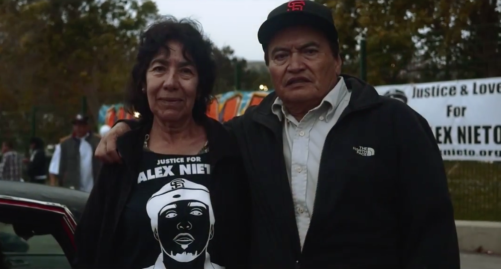 That next generation consists of the new lowriders: familia. Champion Lowrider Nelly Nell Nelson best displays this at the conclusion of the video. With his family, including children, he hops his 63 Impala drop top throughout the Mission Streets.

Flowers in my hair,

Stars in the sky.

Can’t fight this feelin between u and I.

Nothin I’d rather do.

Romance and Righteousness together forever.

One thought on ““Romance and Righteousness: The Creation of and Historical Significance of Favi Estrella’s ‘Cruisin’ with You’ Music Video””