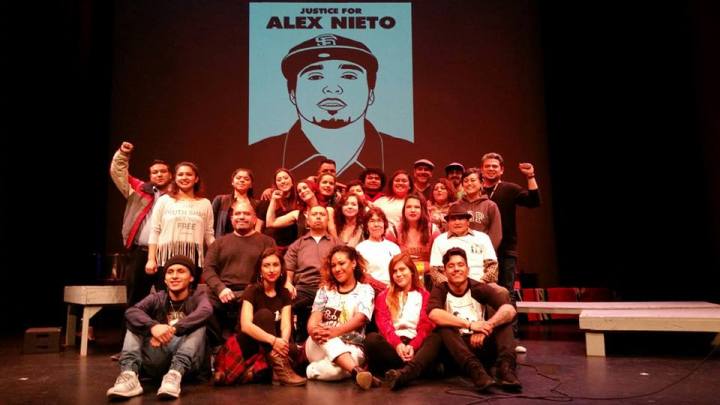 The sound of gunshots greets you to the plot of the play: “On the Hill: I am Alex Nieto.”

Alex Nieto, we learn, was a young man racially profiled by the SFPD and unlawfully killed by 14 of their 59 bullets shot at him on top of Bernal Hill on March 21, 2014. The community would not accept this horror story, so the community rose. The artists rose. The youth rose.

The cast are all young people from the inner city. The musicians are a new breed of Santana/Loco Bloco/hip hop/rap fused artists with their own rock and roll soul slick style. Their music is a reminder of roots and a promise of revolution. Angela Rey. Amadeus Oyagata. Anthony Corona. Cy Thompson. Ariel Mestaller-Orallo. Mosiah Concha. Madison Cenac. Liset Gutierrez. Grace Nevarez-Ortiz.

“On the Hill” constantly confronts their pain, the taboo of gentrification in the most progressive and liberal city on planet earth. San Francisco, the city itself, becomes a main character. This is, however, a universal story, for it forces us to question, then, how racist and classist is it in other places, such as Denver, San Antonio, Walnut Creek, places that are not as open as San Fran. And even here we realize the developers believe the earth was meant to be made into cubicles, partitions, workspaces.

Wildflowers must be massacred.

Then how can the actors dance their pain away? They dance and gift us creativity and courage, performing intricate moves, tribal acrobatics, ballet-style grace. Nietzsche once proclaimed that a day without dancing is a day without life. These youth prove life in front of our eyes. Here is where the audience begins to see art as an authentic transformation tool. The message is deep: we create our own movements; we transform the tragic into triumph. We mold our own media, not made by politicians or professors, or ultra-intellectual outsiders, but made by people who care about community uplifting. The play is the epitome of vida loca, the street creed. Here locura serves as a medicine and philosophy forward, for who else would create a play that so blatantly confronts the perfect system of corruption?

“On the Hill” exposes the entrenched corruption at every level of the San Francisco machine. Based on actual testimony and trial transcripts, the play reports on the district attorney’s failings to prosecute the police officers who killed Alex, the collusion between the district attorney and the city attorney, the police department’s theft of Alex Nieto’s car and search without a warrant, the city attorney’s attempted manipulation of Yahira, Alex’s girlfriend, Alex’s wrist bone in his pocket.

Even with all of this overwhelming evidence, the jury decides against Alex Nieto and in favor of their beloved protectors, the police. The white jury. No African Americans or Latinos served as peers. Nevertheless, the community is not smashed by injustice. We know there is no hope through their system. So we create our own. In the play, the actress that played Elvira Nieto, Alex’s mother repeats: “I am not la llorona, the weeping woman.” We dance to death. We create art out of hatred. We realize and acknowledge our own power and do not hope for others to save us. We have proven we are not helpless. The future, even with all its obstacles, is bright.

Where do we go from here? More places, more performances, worldwide international travelers (or troublers, if you say it with my father’s musical accent). We play in front of their face and show them the roots of Frisco and how we still lead the way, even when they kill us. We continue to fight for justice for Mario Woods, Amilcar Perez-Lopez, Luis Gongora, and all the others who have fallen, unlawfully killed by SFPD.

We fly even when we fall.

We need more writing about this play and these issues. We need our own education, our own arts, our own agency.

We need leaders like Paul Flores, the director, a working star. Consider it was only a month ago that Paul was recruiting actors off the streets. For them to perform the way they did, he must have reached into their guts and souls. Of course they had these gifts inside them all along, but we must praise Paul for his ability to love and to show them to give their love away to an unknown audience. Leaders love, serve, learn, and teach, but don’t bullshit. They train and inspire the next generation. A professional, Paul respected their style and worked to fine-tune it.

Leaders have gotten a bad rap lately—because we imagine idiots. But I am not referencing the clowns or political leaders but authentic organizers full of heart and soul, leaders with vision and selflessness but also with guts and unafraid to be leaders. Leaders work and prove, and the proof is not in a theory but in a substantive action. To accomplish is to practice constantly and to work ceaselessly. We cannot follow shortcuts.

While some may feel disheartened at the end of the play because there is no clear happy Hollywood ending, we must understand that art is not meant to be pure propaganda. Not every singular story or piece of magic surrounding the Alex Nieto movement could be told in ninety minutes. Perhaps more could have been explored about the effects of the intense trial, how, for example, we influenced other art, murals, songs and music, performances and actions, like a 2015 street play, a mock trial where the Nietos actually ripped up the badges of the killer cops, or the feats of the Frisco Five hunger strikers who, with puro locura and love, put their lives on the line in front of the Mission Police Station for 18 days and nights. Perhaps the play could have shown how joined together with other coalitions, such as the Mario Woods and Amilcar Perez Lopez Coalitions, we fired the chief of police of one of the most powerful cities on planet earth.

But that is for another story, one that can be created by our own people. “On the Hill: I am Alex Nieto” serves as a springboard for more. Using this play as a template and inspiration, we can create our own plays, our own world. That’s the way I see it. That’s the way the Nietos see it, as they loved the play and fully support it.

Thanks to all who have proven their amor and continue to fight the good fight.

One thought on ““We Fly Even When We Fall: A Review of ‘On the Hill: I am Alex Nieto’””