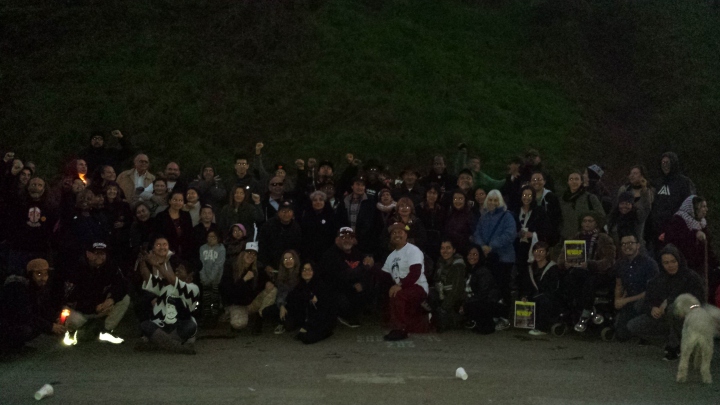 As the founder and humble leader of “Amor for Alex Nieto,” I, along with the family and coalition members, give thanks to you and wish blessings upon you, our loyal supporters, our true community warriors.

Last night’s Alex Nieto Memorial Celebration was pure love. Today the love blooms; we unfurl the love to friends, to strangers, and even to our enemies.

Amor is love, and the love for Alex Nieto existed before he was killed by the police. Our community love has always survived, but many times the mainstream media, the education system, spite, pettiness, and fear have obstructed our power of amor. We, however, have consciously used this potential to transform the world, even though some think it is politically and realistically incorrect to use amor for action.

On Saturday, March 22, 2014, the night we found out Alex had been killed by the police, it was a three-member group of Alex’s best homeboys and my family who formed a union of love and suffering. At three o’clock in the morning, I called my dear friend and fellow Hastings law school alumnus, super-lawyer Adante Pointer, and he, even without knowing the specifics of the situation, agreed to investigate and take the case. The next morning, hungover yet hungry for justice, the homeboy Lowride and I hit up advice from the mayor of La Mision, Roberto Hernandez. To brainstorm genius ideas and to summon the spirits of the Mission streets, we went cruising in his white convertible Impala lowrider. Looking directly into my eyes, Roberto Hernandez told me it was time for me to be a leader. Before Alex was killed, I had already been accomplishing positive things in the varrio and around the Bay, especially because of the publication of my first novel Barrio Bushido, Alex Nieto’s favorite book, our intellectual street story literature.

The Mission non-profit organization HOMEY, Frank Lara, Roberto Hernandez and others organized the first march, which was on Saturday, March 29, 2014. Running from Kezar stadium, where my daughter Margarita was competing in the state wrestling championship and won third place in honor of Alex Nieto, I showed up at the Mission Cultural Center and immediately began utilizing my street skills, Marine tenacity and forward movement ideology, and my educational experience, having read hundreds of books and written thousands of pages. “Amor for Alex Nieto” was born.

It was Jeff Bac Sierra, my brother, a superstar street homeboy, a man who was both loved and hated, that inspired us to amor. In fact, Alex Nieto loved Jeff because he had marveled at the legend. Both Refugio Nieto and Alex’s brother had witnessed the ferocity of Jeff Bac Sierra, a man full of tortured love and demons, who finally succumbed to the street life. Alex admired my brother’s spirit, and he confided that he felt that spirit through me. Still, Alex had a hard time understanding the concept of gifting away amor. Like many other poor people, Alex thought we should charge for our ideas or do things for money. That is completely understandable, but that capitalist purpose, I felt, should not be the main objective of our unity.

We, best friends, Alex, Lowride, and I, would hit the streets with love and smiles, helping people out with rides, poetry, partying, education, and positive movement. When we would meet, we would greet each other: “What’s up with the movement?” When we parted, we would declare: “I love you, brother.” Amor for Alex Nieto was actually created while Alex Nieto was alive. Love is a difficult concept that many simply cannot accept, and that is why over the past two years and nine months, we, the coalition, have experienced transformation. There simply is no compromise with amor as our living force. The Nietos agree.

Through all of the obstacles and victories, I have done my Barrio Bushido best, which is not perfect, but it has been my best to serve you because I understand and feel that we need service, the ultimate manifestation of bushido, the warrior code. Authentic amor is needed during these difficult times. That is why yesterday’s Alex Nieto Memorial Celebration was beautiful— because the culmination of love bloomed like a flower. We ate well, drank some good shots, smiled, played congas, laughed, and listened to wisdom. We took these pictures, the biggest gathering of the 21st to date. At the exact spot where Alex was killed, Brown and Black were united: street homeboys and homegirls, families, lawyers, law students, activists, muralists, musicians, lovers of life, community. Afterwards, in the dark, we were not afraid because we had each other, and each other is all we need. We embraced, we hugged, we felt the victory of humanity and amor.

This is the true story of “Amor for Alex Nieto.” 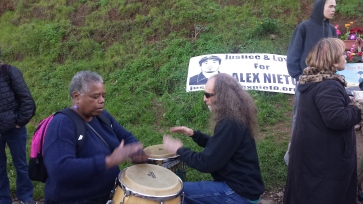 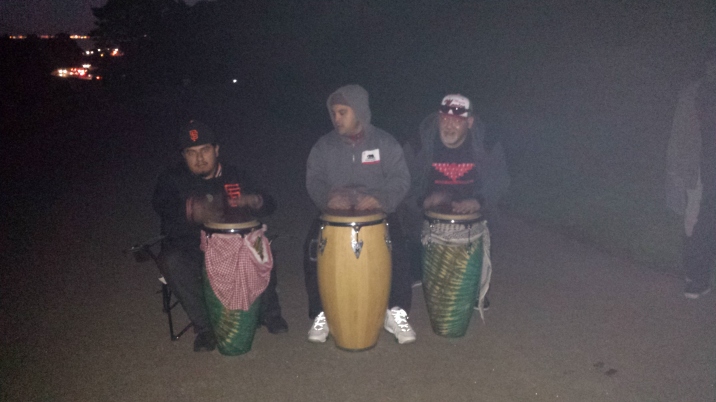