Today, it has been a decade, a dime, ten years, time dissolved, melted, some kind of marker, a point for reflection.

It was one of the most traumatic and life-changing moments of my life, both for the worse and the better.

He was a man. And I still call him, think of him as, my older brother, even though now I am seven years older than he ever was. A street warrior who fist-fought and actioned the most daring ridiculous feats, he hit his last angel dust maton today, ten years ago. Now he snores with the angels forever. He did not make sense, yet his teachings have gifted me more wisdom and balls than any formal education or pinche political theory. His cause was the streets, the grit and glory of vida loca.

No matter whether he won or lost his battles, he always showed his face.

Death is the only proof you are an O.G.

He showed me the way, and now I am here. He’d be pissed at me for a lot of the shit I’ve wrecked, but he’d be more happy and thrilled about the way I’ve tried to transform vida loca into mas vida loca, which is amor for our gente. I have done what I have done in my life in his honor.

This poem and video are dedicated to him and all those Mission and San Fran souls that lead the way into the beyond.

“They Can Take Away Our Lives, but They Can’t Take Away Our Music”
Inspired by War’s firme rola and Roberto Vargas’s “They Blamed it on Reds”

Q-VO, Homes
Sup Blood
Silence
A mad dog stare
Welcomes you
To tar and cement
Spirit and soul
Amor
Amor
Amor
The fumes of yesca and
Lowrider exhaust are
Healthy for homeboys and homegirls

“Though they take my brother’s life,
And deny his given rights

Yes, the message will be heard,
As the four winds spread the word

And our spirit, they can’t break,
Cause we got power to communicate. 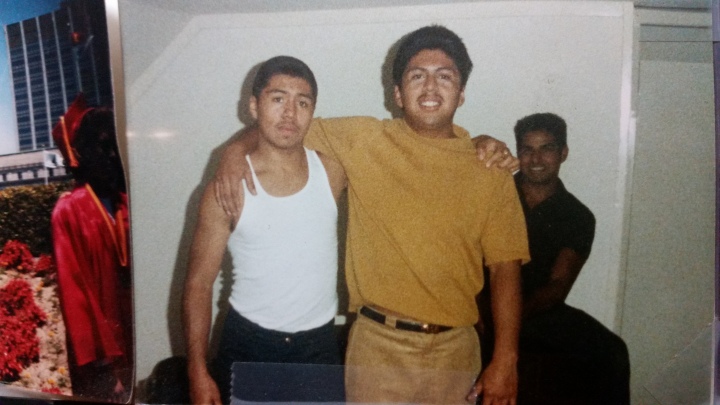 Foto of me and Jeff back in ‘88, the day before he left to San Quentin State Penitentiary.