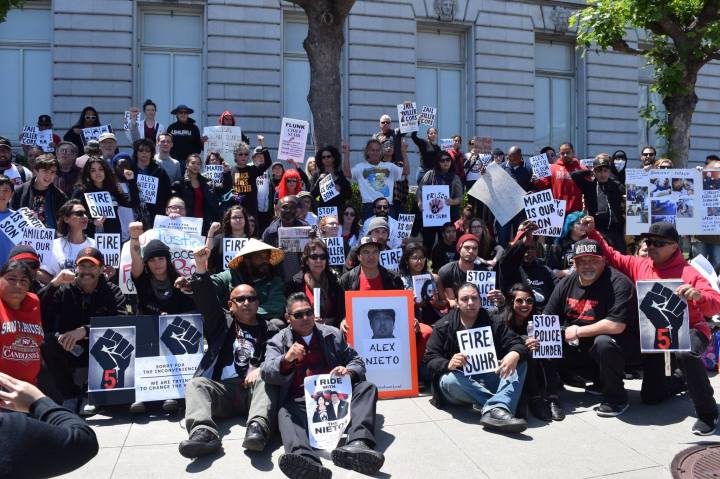 Enjoy and share my latest manuscript of fiction, a novel The Revolt of Los Locos, pages 117-120:

I was working all the time, sleeping, dreaming, nightmaring to what needed to get done, then waking up by five a.m. every day, so I could organize and write and connect people together, and it was me against the world, and I was like fuck it, I can do this, we can do this. I didn’t know what I expected, but I knew that just getting it out there, things were happening. People were walking with dignity. People were loving life. People were standing up against impossible odds, throwing up with passion what almost seemed like gang signs of Alex Nieto—like if he represented the ultimate varrio, one that united us with amor. We were becoming conscious of the poison and corruption that was happening all around us.

Revolution was making us stronger.

The politicians and city lackeys were just doing more of the cliché same, but we were exposing sin. Compared to them, we, the locos y locas, were not, at least, unconscious yet believing we were actually doing the right thing. The suits and pleated skirts gawked at us as if we were stupid, didn’t understand structure, rules, or text-based power. So they pitied us and justified taking advantage of us, rationalized to themselves that it was for our own good, the greater good, that our loved ones had been killed, assassinated on the streets. It was ok to kill a few spics and niggers so that the greater public could benefit from the dollars that the police protected and kept in power. They were not locos. They were the sane, smart ones. The worst ones.

The crooked police union was on top of the list. Bully businessmen, these corrupt cops expected $150,000 bucks a year for their obedient rookies who barely graduated high school. It didn’t matter if the cops were white or not, although most of them were, they endorsed white supremacy because that’s what was sponsoring them, that’s who they were protecting, regardless of whether San Francisco had the reputation of being the most progressive place on planet Earth. The union was the direct link between the police force and the one percent elite economic class. Their confederacy protected cops’ money, benefits, and pension, so they had the arrogance and intelligence to invent their own constitution. All had to submit to it, that which was above even the United States Constitution! Their dream and our nightmare is shoved down our throat as the Police Officers’ Bill of Rights, I shit you not, a straight up ‘fuck you to what you thought mattered, like freedom of speech, due process, and equality; we, the coppers, are better than all of you.’ With such a stranglehold of political clout, they knew that whatever they wanted they could get, or they would simply threaten to crush you. They were fearless for a good reason: Because the politicians worshipped the law, they thought there was no way to ever defeat or even challenge them, cause, come on, didn’t you learn in elementary school to pay reverence to the Bill of Rights? Founding fathers’ bullshit. The union had the guns in holsters, so no one could fuck with them. A union of ultra-capitalists that make profit off our dead bodies.

The district attorney was the police union’s first line of defense. Gakaka had actually been a cop, the top cop of San Francisco as their chief of police. Intimately, in cahoots with the badges, he had mastered the game, understood that his job was to act innocent, just like nice naïve Lady Justice who holds the scales blindfolded, not knowing she’s about to get fucked. Gakaka knew the standard operating procedure was to lead the stupid ass media on a wild-goose chase called righteousness, aka law. His headquarters was the Hall of Justice, but it was actually a house of horrors that utterly ruined us, stole our time, our lives, our homes, our job opportunities, our hopes. And no one cared about fighting for us cause it was ok what they were doing cause you know already that no one gives a fuck about Brown and Black people, but especially not Brown and Black folks marked forever as criminals. It’s only natural we’re abandoned since everyone’s conditioned to hate criminals (code word for Black and Brown men) by the media, school, and politicians, those sick bastards that think they stand for something holy.

“See How It Feels”

If I disgust you
Look into the
Mirror
And
Smash it

I am your
Reflection
Calling you out
On your
Bullshit

Look into my
Brown eyes
Do you see
Yourself?

Are you angry at me
Because
I make you
Face
The Truth?

See how it feels
To be the
Best

Ben Bac Sierra reading from The Revolt of Los Locos in the San Fran Mision:

“DON’T LET NO ONE GET YOU DOWN”