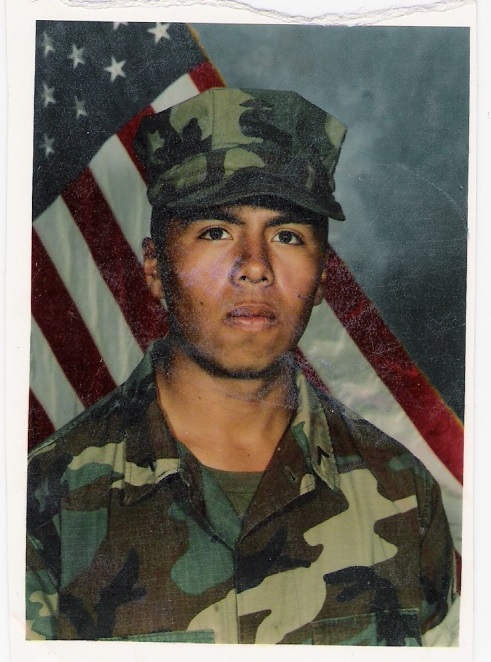 This is what I remember:

I wanted to kill someone. I wanted someone to kill me.

I joined the Marine Corps to be able to legally kill someone and/or to be killed as a macho man. No recruiter tried to conscript me or promise me anything beautiful like a GI Bill or a free funeral with burial plot. I did not know about those things. I knew the Rambo and Commando and Full Metal Jacket propaganda and the street gang respect the Marines held. I had to hunt for a recruiter who would even try to enlist me, as all the other recruiters laughed at me, dressed as a cholo with a long rap sheet. At seventeen, I knew I had to leave the streets, San Fran Frisco. All my fellow brothers were killing, being killed, and getting sentenced to prison during the initial era of mass incarceration in the United States. In 1989 my brother serving time in Susanville Pinta wrote me a letter and advised me to choose another route, one he could never choose for himself. After he was released, he never let the streets go, La Mision. He died in 2008 when he was only 39 years old, a young OG. I remember him.

Four years in the Suck: I remember suffering a lot. Wanting to suffer and hating the suffering. Believing I deserved the suffering. Loving the suffering. Grunt Machine-gunner. M60 Echo Three and Mark 19 Grenade Machinegun. My weapons. My fists. My stupidity. My endurance and obedience to orders. Frontline.

That suffering and vida loca insanity was necessary for me to become humble and grateful. There was no solution or education that would have helped me understand life and death except for life and death. War. Pain. The Sublime that comes after tough operations. Going through it. Drinking. Fighting. Robbing. Rotting.

I met good people, the best, leaders that would crack jokes in the middle of madness and hold their bearing during chemical gas attacks. I added all that spirit to who I am, tried my best to implement that energy in all my activities: education, teaching, familia, amor, Amor for Alex Nieto, community, learning, fighting, writing.

For what does it mean to be a writer if you do not write what you live and live what you write?

I have a memory for the many dead, mostly the other side Iraqis, as we had not been obliterated like them, and also for my brothers who would have wanted to escape to the Marines, too, but ended up dying violent deaths on the streets and in the pens. That is Memorial Day, too.

Memory for the dead.

I have a memory of in the middle of battle being afraid and praying silently to be saved and then promising God, the unknowable nothing that has no name (I am what I am), that I would do something positive with my life if I could simply be allowed to live. Live. After the war, for many years, I was ashamed of myself for praying and asking to be protected.

I am not ashamed anymore. I learned humility, which is a hard lesson to learn in the midst of so much machismo. In honor of my present existence, I renew my promise to God: I will continue doing something positive with my life: Amor.

It is not a solution. It is simply all I can do to honor memory.