I say Happy Fourth of July because this is our country, and it is a tragedy that we could feel ashamed to feel happy for our existence in this place, when we built this, continue on the Frontlines to build this place that does not love us like we love it.

The “it” being the earth dirt itself. The “it” being an imagination of something called country, ours actually named after the first European person to tell us we are confused and lost—Amerigo Vespucci.

America, we are still confused and lost.

But this is what we have where we are, and there is no other place to go, except to stand where we find ourselves. To figure this all out, I subscribe to the great James Baldwin’s dilemma and solution in his “Autobiographical Notes.” By 31 years old, he figured out that he was a bastard of the West (the mythical idea that Western Europe is the cradle of civilization): “when I followed the line of my past I did not find myself in Europe but in Africa.” The textbooks teach us that we all landed like pilgrims on Plymouth Rock and descend from (and should aspire to be) Shakespeare, but one day we look at our hands on the book, and we see our brown skin reflected against the whiteness of the page, and we know everything is a lie. There is no escape, though, no place to return to, when “I had certainly been unfitted for the jungle or the tribe.” Like Baldwin, I, too, could no longer go back to my father’s jungles of the Q’eqchi kingdom of Cobán and pretend myself innocent of all this corruption.

Wisdom: stealing and sharing. During the 80’s and 90’s, in San Fran Frisco’s Mission, there was an infamous gang known as the Hogs. They held it as a compliment to be a Hog, a special prestige: Hog Status, Homes! A Hog took it all and made it his for himself and his Loved Ones. Appropriation is Hogging. There is no way to deny I exist in this place; there is no way to undo the centuries of education I have been brainwashed with, but instead of shooting for a pilgrim’s Harvard explication, I, Hogging from Baldwin, add my own “special attitude” to everything I do. I am a Homey, a Loco, created on these American streets. I offer that analysis and amor to everything I do. I make it mine, otherwise I have no place, can never feel I belong, and I refuse that feeling of humiliation.

Because of my paranoia or simply my consciousness of how these arguments can be construed, my consciousness of history itself, I feel the need also to write today about being a Marine, a combat grunt veteran, but the root of who I am as an American is not there. The Marines especially loved me because I was a Loco. They made me a squad leader many times because even though I was only seventeen years old when I joined, they knew and felt I was more American than corn-fed Americans, and they wanted that Loco spirit for their purposes, just like they want the dishwasher’s spirit more than anything. I could not articulate myself, nor for drill instruction did I know my left foot from my right foot, but I knew how to charge forward and how to suffer, a wisdom I learned from oppression and injustice on American streets.

He aint heavy; he’s my brother. 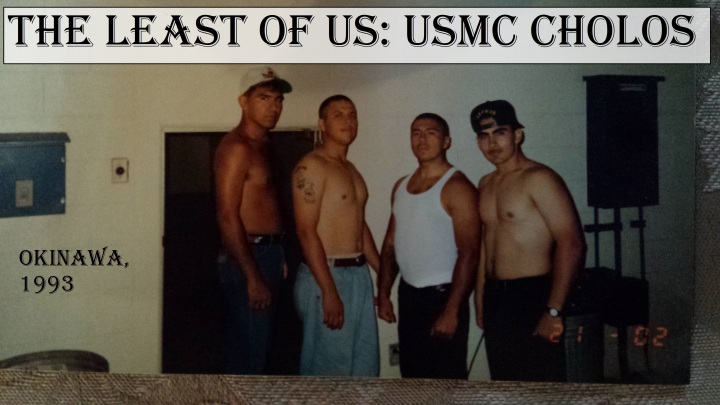